A Sprat to Catch a Mackerel, by Raymond Ackerman 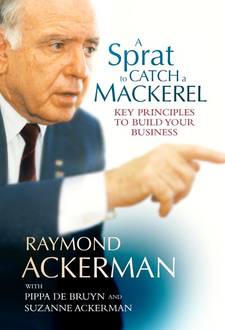 In A Sprat to Catch a Mackerel, Raymond Ackerman shares the basic tenets behind his business philosophy – timeless principles that have guided him through some of South Africa’s most turbulent times.

I never thought of myself as an entrepreneur. If I had not been fired from what I thought was a secure job in a large corporation, I would never have started my own business. Now it seems inconceivable that I might have been an employee my entire life, but I may very well have been seduced by the comforts of a steady monthly income and company benefits. It is a sobering thought, when you consider how many more entrepreneurs may remain trapped in jobs that grind their self-esteem and joy because they think they don't have what it takes - courage, money, particular skills, a business plan - to get a business off the ground. I have written this book for those entrepreneurs 'in waiting', as well as those who already have a business up and running but are struggling to generate a viable income. In fact, anyone looking to enjoy greater satisfaction in their working environment will hopefully find some guidance in the following pages. Because as I sit here on the eve of my retirement, almost forty-five years after I bought my first four Pick 'n Pay stores, I can honestly say it has been an exhilarating ride. Being an entrepreneur enabled me to set in motion everything I ever wanted to achieve - the freedom to grow a business based on my personal principles, the ability to create jobs, tackle iniquitous cartels, break price monopolies and increase the country's tax base. And of course, to serve the South African consumer - my primum movens, the primary reason I wanted to create my own retail business. Because, aside from anything else, the entrepreneur essentially provides something that society needs - something that makes the customer happy. I am a fierce supporter of the entrepreneurial spirit, the lifeblood of a nation's economy. As such, I have always had an open-door policy for any student wanting advice on the business they want to get into, or for struggling entrepreneurs wondering where they've gone wrong. It's also why I founded my Academy of Entrepreneurial Development, a six-month, full-time programme offered to 18- to 30-year-olds from disadvantaged backgrounds, running at the UCT Graduate School of Business and the University of Johannesburg. Places are limited, however, and usually oversubscribed. So, when Jeremy Boraine of Jonathan Ball Publishers approached me about writing a book that would sum up my business philosophy in a simple, accessible way - one that would be relevant to anyone starting or trying to grow any kind of enterprise - I was persuaded that it could perhaps be useful to write one more book. A Sprat to Catch a Mackerel is an encapsulation of my heartfelt belief in how small, seemingly insignificant actions - a chance meeting, a courteous gesture, an intense conversation, a keen observation, a systematic analysis, a positive response - can capture a big idea. Capture enough of them, and you build a great business. The most important events in life are sometimes the least predictable, but it's your attitude to these events that you can control. [...]

This is an excerpt from the book: A Sprat to Catch a Mackerel, by Raymond Ackerman.

A Sprat to Catch a Mackerel

The practical, accessible advice in 'A Sprat to Catch a Mackerel' will help you define and build your vision, and help you reach success and self-actualised growth.

A Piece of the Pie. The Battle over Nationalisation

A Piece of the Pie: The Battle over Nationalisation offers a short, accessible overview of the political and economic debate surrounding nationalisation in South Africa.

Making Money out of Property in South Africa

This is a clear, well-written and factual perspective on the South African property market