A Rebel for Change in in Apartheid South Africa and Colonial Namibia, by Gerhard Tötemeyer 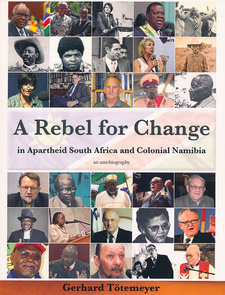 In his autobiography A Rebel for Change in in Apartheid South Africa and Colonial Namibia Gerhard Tötemeyer successfully integrates own experiences within a precise analysis of political and societal developments not only in Namibia but also in South Africa.

"Thomas, do you see the aeroplane up there in the sky?' Hermann asked. It was a Junkers F13, dubbed 'the Fly' by Junkers, a small passenger plane which flew from Windhoek to Kimberley in the Union of South Africa once a week and was parked in Keetmanshoop for the night. The year was 1935. 'Yes, I see it', Thomas replied. He was a young Nama, the churchwarden of Hermann's congregation. 'Would you like to fly one day?' Hermann asked. 'No', Thomas said, 'either I am in heaven or I am on earth, but not somewhere in between.' This answer surprised Hermann and he smiled. He was a German missionary in a non-white congregation. Heaven and earth were important concepts in his theological exegesis, but somewhere in between? Hermann was my father, born in the year 1900, the son of a public servant. The Tötemeyers' roots are found in the Teutoburg Forest in North Rhine-Westphalia. The ancestors were first called Teutemeier, which meant the German farmer. The farm Teutehof still exists in the vicinity of Detmold. The change to Tötemeier, also spelled Tötemeyer, was probably the result of French influences. An intense personal experience, an accident which almost cost him his life, was the reason why my father wished to become a missionary. In the end of 1927, after completing his training at the missionary seminar in Barmen, the Rhenish Missionary Society sent him to what was then South West Africa, the former German colony. At that time the country was governed by the Union of South Africa under a League of Nations mandate. My father Hermann was first taught some Afrikaans and Nama by missionary Fritz Rust in Luderitzbucht before he was introduced to the congregation at Rietfontein in 1928. Rietfontein was located on the north-western border of South Africa, while the mission's outstations Aroab, Klipdam and Boksputz were in the far southeast of South West Africa. All of them were small communities which mainly consisted of so-called coloured people who lived poorly. They kept small livestock and worked as casual labourers, mostly on white-owned farms. Together with my father the members of the congregation in Rietfontein built a modest church, with a bell tower in the old Cape Dutch style next to it. At the outstations the 'bell' was often a disused oxygen cylinder which produced a harsh but very audible sound when it was hit with an iron rod to call the congregation to worship. The rules of the missionary society firmly stated that my father had to be engaged to be married before he left Germany for his first assignment. His fiance also needed to be approved by the society's management and she had to comply with a set of strict stipulations, such as a good family background, musical talent and the ability to play an instrument. Furthermore she had to be fit for the tropics. But most important, of course, were deep-seated religious beliefs. And she had to embrace the tasks that she was expected to fulfil as a missionary's wife. My father's fiance was Margarethe Orlopp, Gretel for short. She came from a pietistic family. Her maternal ancestors were Huguenots. In 1598 the Edict of Nantes granted freedom of faith to the Calvinist Protestants in France. [...]

This is an excerpt from A Rebel for Change in in Apartheid South Africa and Colonial Namibia, by Gerhard Tötemeyer.

Namibia today: Challenges and obstacles to reconciliation and stability three decades after independance.