A Hunter's Wanderings in Africa, by Frederick Courtney Selous 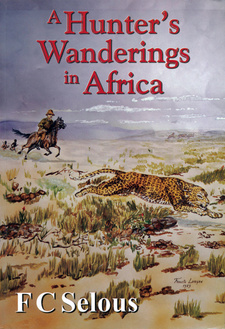 Frederick Courtney Selous' A Hunter’s Wanderings in Africa, has been a best seller from the time it was first published and on each and every subsequent occasion it has been republished.

On the 4th of September 1871, I set foot for the first time upon the sandy shores of Algoa Bay, with £400 in my pocket, and the weight of only nineteen years upon my shoulders. Having carefully read all the works that had been written on sport and travel in South Africa, I had long ago determined to make my way to the interior of that country as soon as ever circumstances would enable me to do so; for the free-and-easy gipsy sort of life described by Gordon Cumming, Baldwin, and other authors, had quite captivated my imagination, and done much to determine me to adopt the life of ever-varying scenes and constant excitement, which I have never since regretted, and for which an inborn love of all branches of Natural History, and that desire so common amongst our countrymen of penetrating to regions where no one else has been, in some degree fitted me. As I knew no one in Port Elizabeth who might have given me advice, I determined first of all to make my way to the Diamond Fields, from which place I rightly judged it would be easier to make a final start for the interior than from the coast. Accordingly, as I had too much baggage to allow me to travel by Cobb and Co.'s coach, which was then running, I looked out for a waggon bound for the New El Dorado, which there was little difficulty in finding, and after striking a bargain with a young transport rider1 named Reuben Thomas, who undertook to convey me and my 300 lbs. of baggage to the Diamond Fields for the sum of £8, I finally left Port Elizabeth two days later on, September 6 th. The journey between the coast and the Diamond Fields is so uninteresting that I will not weary my readers with any account of it, as I wish to devote my pages to narratives of my experiences in those parts of the far interior at present but very imperfectly or not at all known to the general public. After a very slow journey of nearly two months, we at last, early on the morning of the 28th of October, reached our destination. As we had only travelled at night, allowing the bullocks to rest during the heat of the day, I had been able to do a good deal of shooting in a small way, and in return for an immense amount of hard walking, had managed to bag one bushbuck ram, one duiker, one springbuck, one klipspringer, and eight gray and red rhebucks, all of which I had carried on my own shoulders to the waggons. On the evening of the day on which I reached the Diamond Fields, a great misfortune befell me, for a small double breech-loading rifle by Reilly, with which I had been shooting along the road, was stolen from the waggon, and no endeavours to trace it were of any avail. My armoury was now reduced to a double ten muzzle-loading rifle by Vaughan, a very inferior weapon, as it threw its bullets across one another, and a little double gun that shot well with both shot and bullet. On the market next morning I bought a horse for £8, and rode over to Pniel. Here I met a fellow-passenger, Mr. Arthur Laing, who had left the ship at Cape Town and gone up to the Fields direct by passenger cart. He told me that he was tired of digging, and was thinking of making a trading trip through Griqualand, and down the Orange river, taking with him as guide and interpreter a man named Crossley, who knew the country and the people, and who, indeed, had been private secretary to Adam Kok, the Griqua chief, and once held a very good position, from which a passionate devotion to the flowing bowl had dragged him down step by step, till he now did not own so much as the shoes he stood in. He was, however, in his sober moments, which, when within ten miles of a canteen, were both short and infrequent, an intelligent and well-informed man. (...)

This is an excerpt from the memoires: A Hunter's Wanderings in Africa, by Frederick Courtney Selous.

A Hunter’s Wanderings in Africa

This is a facsimile reprint of the famous 1881 edition of A Hunter’s Wanderings in Africa.

Kruger National Park: Questions & Answers is a compilation of the questions most frequently asked by visitors to the Park.