A Guide to the Reptiles of Southern Africa, by Graham Alexander and Johan Marais 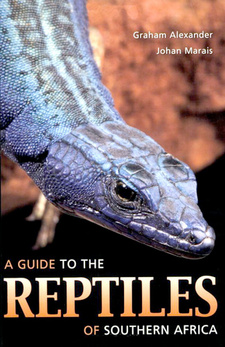 A Guide to the Reptiles of Southern Africa, by Graham Alexander and Johan Marais.

A Guide to the Reptiles of Southern Africa, by Graham Alexander and Johan Marais is aimed at wildlife enthusiasts who are interested in the reptiles of southern Africa.

In some respects, it does not follow a conventional format for a field guide: rather than being dealt with individually, the majority of species are grouped according to their appearance, and occasionally a group includes species that are not even closely related to one another. One of the underlying philosophies used for clustering species into groups was: 'Could a layperson be expected to differentiate between two species without the aid of specialized equipment?' If not, the two species were placed in the same group. Many species of southern African reptiles can only be identified to species level with careful and detailed observation, with the aid of a binocular microscope. Even more frustrating for the non-expert, new molecular techniques are delineating species that cannot be differentiated from closely related species by morphology alone. This means that, in certain instances, positive identification to species level is simply beyond the capability of non-experts, and can even be a challenge for experts. Identification of reptile species is generally more difficult than it is for species of other vertebrate groups, such as birds or mammals. This is probably because their specific habitat requirements result in low dispersal abilities, increasing the potential for neighbouring populations to become genetically isolated and distinct, but with few physical differences. This is especially true for lizards that are dependent on specific types of rock or soil. In certain instances, species have been grouped where two or more rare species are similar in habit, or where little is known of their biology. This allows space for more detailed notes on the biology of the better-studied species. Information on new discoveries resulting from ongoing research have therefore been included to give the reader a better 'feel' for the ecology, physiology and natural history of each group. An up-to-date list of species (at the time of going to press) in each group is provided. Information on the distribution and reproductive biology is also supplied, and conservation issues of threatened species are considered above and beyond the official 'Red Listings' of current conservation assessments. Although this field guide is reasonably comprehensive in its coverage, 12 species have not been included in the species accounts. These species are either restricted to very small ranges in the northern extremes of southern Africa, or occur only in inaccessible localities. They are therefore not likely to be encountered by the vast majority of readers, and little is known about their biology. Specifically, omitted species are the Black and Yellow Burrowing Snake (Chilorhinophis gerardi}, Olympic Snake (Dromophis lineatus), Semiornate Snake [Meizodon semiornatus, Cunene Racer Coluber zebrinus). Lowland Swamp Viper [Proatheris superciliarus), Bouton's Skink (Cryptoblepharus boutonii), two species of Rock Lizard (Australolacerta}, the Tree Lizard (Holaspis guentheri), two species of Leaf Chameleon (Rhampholeon) and the Tete Gecko (Elasmodactylus tetensis). (...)

This is an excerpt from the guide: A Guide to the Reptiles of Southern Africa, by Graham Alexander and Johan Marais.