A Field Guide to the Tracks & Signs of Southern, Central and East African Wildlife, by Chris and Tilde Stuart 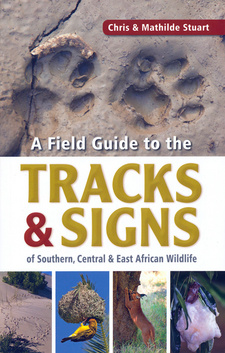 A Field Guide to the Tracks & Signs of Southern, Central and East African Wildlife, by Chris and Tilde Stuart. Randomhouse Struik; Imprint: Nature

The new edition of A Field Guide to the Tracks & Signs of Southern, Central and East African Wildlife, by Chris and Tilde Stuart, retains the unique approach to identification that made the first edition so popular.

All animals, even humans, leave signs of their presence in an environment. By closely studying such clues you can glean much information about the mammals, birds, reptiles and invertebrates in the area without ever seeing them. Many animals are active mainly during the hours of darkness, or are highly secretive and spend much of their time under cover, so in the past people had to be skilled at detecting and tracking prey, or else go hungry. Reading and interpreting animal tracks and signs must have been second nature to early humans, yet today only a few hunter-gatherers, such as the San (Bushmen) of the southern deserts and the Pygmies of the equatorial forests, retain this ability. Often farmers, hunters, professional conservationists and others who spend a great deal of their time in rural environments know surprisingly little about the activities of the creatures around them. In fact, most people are unable to tell one track from another or to recognise even obvious signs.This is a pity, since tracking and reading signs is an absorbing and rewarding pastime. Although a particular track or sign may be unfamiliar to you, with some thought and detective work you can often identify the animal that made it and establish what that animal was doing. It is even possible on occasion to identify a particular individual, such as a leopard with a missing toe, the result of a lucky escape from a gin trap, say, or an antelope with a damaged hoof.The picture you are able to build up can be as accurate as if you had observed the animal directly, and may sometimes even provide you with additional information. By interpreting animal tracks and signs in an area, you can piece together a record of recent visitors and events. For instance, if you came across the site where a leopard had stalked an impala you might see the following: approach tracks, the spot where the predator crouched, jumping prints, deep tracks left by the antelope in its bid to escape, blood spots on the sand, a drag mark leading to the bushes among which the predator concealed its kill, and scratch marks that the cat gouged into a nearby tree after its meal. It would be easy to walk straight past the scene, but a careful observer could piece together a picture that is as fascinating as witnessing the kill itself. A word of warning: be extremely careful if you are on foot in an area where potentially dangerous animals such as lions, leopards, elephants, rhinos, hippos, buffaloes or Nile crocodiles occur. It is easiest to read signs in moderately soft (not loose) ground, but even if the substrate is very hard and you cannot find tracks, there is usually other evidence t0 show that a creature has passed through the area.The stories that can be read are sometimes amusing or dramatic, and they generally add greatly to your understanding of the animals in a particular area. (...)

This is an excerpt from the guide: A Field Guide to the Tracks & Signs of Southern, Central and East African Wildlife, by Chris and Tilde Stuart.