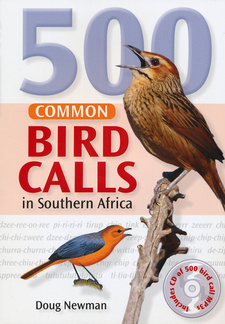 Recognising birds by their calls is a particularly rewarding activity in southern Africa, where we are blessed with almost 1000 bird species. 500 of them are featured in Doug Newman's bird call guide and CD, 500 Common Bird Calls in Southern Africa.

Bird calls are often the best route to identifying a shy bird or to telling similar-looking species apart. In fact, sometimes song provides scientists with their first clue that seemingly identical birds are, in fact, distinct species or subspecies. Birdsong is a complex topic and many gaps remain in our understanding of why birds sing and call. Here we present a little guidance on how to use this book and a brief overview of some interesting aspects of bird vocalisation. The audio tracks accompanying this book are a broad selection of those bird calls heard most often in our region. Included are the common, striking and interesting calls of indigenous species, naturalised aliens and a few rare or nomadic birds that are either well-known or worth listening out for. If you're new to 'birding by ear', you may find it helpful to choose a bird or birds that you're familiar with and then to learn the calls of other members of that group. If you're interested in how birdsong unlocks aspects of behaviour, then try listening to a particular species singing and calling at various times of the day, noting, for example, any differences in how it sounds at dawn or when settling down for the night. You may even want to start by observing just one bird in your garden or neighbourhood and keeping a journal on it. For example, while regularly observing a Karoo Thrush family living in my garden, I soon noticed that the fledgling would give a particular call from a secluded shelter that would reliably draw the parents near. In a case like this, it is reasonble to conclude that the chick is using this call to beg for food. (...)

How to use 500 Common Bird Calls in Southern Africa:

The species accounts in this book follow the order of a conventional field guide, using the traditionally accepted taxonomy. This taxonomy has recently undergone substantial revisions, with some bird families being split in surprising ways, but the older order remains valuable to birders, since it lists species in a way that seems intuitively logical.
Each species account is linked to an audio track-look for the numbered CD icons. As far as possible, the sound supplied is that which you are most likely to hear in the field, whether it be a song, a call, a non-vocal sound or all of these. So even if a bird has a distinctive song, if you're most likely to hear its alarm call, then that is what is given on the CD. The bulk of the book comprises species accounts with details of the main song and other sounds, a description of each species' habitat and a list of birds that sound similar. Determining which birds sound similar is highly subjective and open to endless reinterpretation, but here we've tried to cross-reference sounds comprehensively, even where a given resemblance is tenuous or where habitat preferences render confusion unlikely (for example, the African Harrier-Hawk sounds a lot like a begging Red-knobbed Coot, although the former is not a water bird). The reason for doing so is that a good way to expand the number of songs and calls you know is to start with a bird whose sounds you already recognise, and then get familiar with those species that sound similar. Note that unless otherwise indicated, the song is given by the male. (...)

This is an excerpt from the bird call guide and CD: 500 Common Bird Calls in Southern Africa, by Doug Newman.