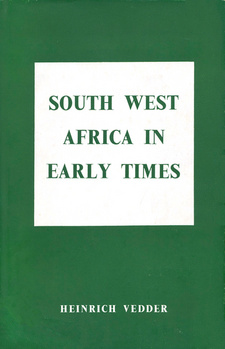 Dr. Heinrich Vedder's South West Africa in Early Times was published originally in German under the title Das alte Südwestafrika and its sub-title stated that it was a history of South West Africa up to the date of Maharero's death in 1890.

Part II. NAMALAND AGAINST HEREROLAND
I. INVASION AND WARFARE
1. THE NAMA INVASION

The spreading of the old tribes

THE Namas of earlier times were not only nomadic stock-farmers but were hunters as well. The land's enormous wealth of game was itself an invitation to the chase, which provided the family with nourishing food. Besides that, the flocks could be spared when the hunting-grounds provided flesh food. They possessed very few firearms but they had made the acquaintance of the horse, for which they willingly gave fifty oxen when they got one from the east or the south. With a horse it was possible to get close up to the larger wild animals and to deal them deadly wounds with an assegai. The meat was then cut into thin strips on the spot and hung on the bushes to dry in the heat of the sun. It could then be loaded onto pack-oxen and-sent to the place where the trekking family had halted with its flocks. A considerable number of men usually took part in these hunting expeditions. Those who had horses undertook the killing of the game, while those who accompanied them on foot cut up the meat, dried it and saw to its transportation. The European hunter made his appearance in their hunting-grounds. As it was ivory that he was after and not meat, the Namas did not regard him as a competitor. Whole villages trekked along with him; the foreigner had a gun and that ensured good results. He set no store on the meat and that made them sure of the booty. It necessarily followed that the game began to be killed off. Giraffes and elephants became much scarcer. The hunters ranged always farther north. In those early days the Swakop River made a tremendous impression on them, for whole herds of kudus, rhinoceroses, and elephants were to be found there. But the Herero hunters drove them away and so they turned in a north-easterly direction and travelled as far as Lake Ngami. The country which the Nama hunter's foot had trodden was, however, regarded as Namaland. It is on this that the saying of the Namas is based that, in former times, their country stretched to Lake Ngami. The game in Namaland actually decreased, but the herds of cattle increased. The people, too, increased in number and it was not long before grazing had to be sought for in the less populated areas. The Red Nation established outposts in the Karras Mountains. Kanebeb occupied the position of lesser chieftain of this offshoot of the great tribe. His successor was Tsauchap and the latter's son Haobeb followed him in the chieftainship. During his rule an open breach between the tribe and its branch took place. The 'Children of the Red Nation' (Kougoan) separated themselves from the Red Nation, which was from that time onwards called the Gei-kou, or the Great Kou, and trekked to the Fish River. Haobeb's son, Willem Swartbooi, assumed the leadership of the tribe after his father's death, about 1835. His tribe was from that time called'The Swartboois'. He took them to the northerly part of the Fish River and to the Kuiseb. Another rich cattle owner, named Zeib, left the Red Nation and trekked to that part of the country which is now known as Keet-manshoop. His people became known as 'The Tseib Hottentots'. [...]

This is an excerpt from the book: South West Africa in Early Times, Table of Content, by Heinrich Vedder.