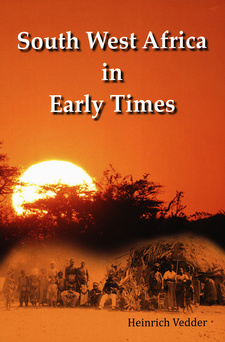 Heinrich Vedder's South West Africa in Early Times was originally published in German under the title Das alte Südwestafrika and its sub-title stated that it was a history of South West Africa up to the date of Maharero's death in 1890.

THE HERERO WAR OF FREEDOM AND THE ORLAM WAR

1. THE HERERO WAR OF FREEDOM

BEFORE we begin to describe the events of the two wars, which turned the whole of South West Africa, from 1863 to 1870, into a theatre of war, it is desirable to make some acquaintance with the people who played a leading part in those wars.

Zeraua had been able to stay at Otjimbingwe under the protection of the mission and the copper mines. Tjiseseta, one of Zeraua's relations, was living in the veld of Omaruru. Mbandjou, who was related to Tjiseseta, lived sometimes in the Kaokoveld, and sometimes in the veld to the east of Omaruru. Ndjiharine, who subsequently became the chief of Omburo near Omaruru, belonged to the same family. These were the family ties between the Herero chiefs of the west, who recognized Zeraua of Otjimbingwe, not as a paramount chief, but as an influential man to whom one could turn for help in times of need, especially as he was on very good terms with the Europeans at Otjimbingwe. Alongside this family bond there existed a second one, which was grouped around Tjamuaha and Maharero. The principal members of this were Kambazembi, who had come in from the Kaokoveld after Tjamuaha's death and taken possession of the country round the Waterberg, Mun-gunda, of whose death we read previously, Kahitjene, whom Jonker persecuted and Mungunda's sons killed, and many others. Now Maharero's mother, Otjoruzumo, Tjamuaha's principal wife, was Kambazembi's sister, and Kambazembi's mother was the daughter of Tjirue, Maharero's grandfather. Then Kambazembi married Ndomo, Maharero's sister, and Maharero, again, took Katundure, Kambazembi's sister, as an additional wife. The chiefs' family circle was completed owing to the fact that Maharero's mother, Otjoruzumo, was a younger sister of the principal wife of Zeraua at Otjimbingwe. In this way all the Herero chiefs were related to each other, and Maharero saw to it that the bonds were strengthened by numerous additional marriages, and that, in this way, any chiefs who had been outside the circle were drawn into it. (On the 26th December, 1863, Maharero took his ninth wife, and in his later years he had more than sixty.) The eastern Hereros, the Mbanderus, did not belong to this circle, for the Hereros and Mbanderus never intermarried. Their most prominent chief was Kahimemua. The Hereros under Nicodemus, who was the son of Kavikunua, the son of Tjamuaha, must be distinguished from the Mbanderus. This is important for the sake of the history of a later period, in connexion with the execution of the chiefs of both these tribes under martial law at Okahandja in 1896. Amongst Maharero's near relations were Hirarapi, his eldest brother, who was killed at the battle of Otjimbingwe in 1863, and his brother Kavikunua, Nicodemus's father, who ruled such of the eastern Hereros as were not Mbanderus. Maharero had a half-brother named Riarua, who was a man of parts, and became the leader of his army. He was the son of Otjipeze, one of Tjamuaha's later wives, and a sister of Otjoruzumo, who is mentioned above. Another of Tjamuaha's sons, who became of considerable importance later, was Kavezeri. One can see how close the ties of relationship between all the important Hereros were in 1862. mysterious power inherited from his ancestors, of being able to kindle and tend a true ancestral fire.  [...]

This is an excerpt from South West Africa in early times, by Heinrich Vedder.