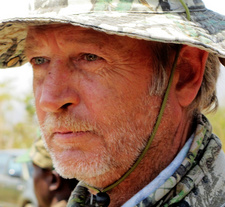 Eeben Barlow served as a commandant (lieutenant colonel) in several conventional, unconventional, and covert South African Defence Force units. Commissioned in the SADF's Corps of Engineers, he served as sapper officer in several infantry battalions, and as second in command of 32 Battalion's Reconnaissance Wing. Following that deployment, he served as an agent handler for Military Intelligence, and thereafter as a covert operative in the SA Special Forces' shadowy Civil Cooperation Bureau. When he became 'politically expendable' he founded Executive Dutcomes, and was initially contracted to train SADF Special Forces operators in covert operations. As the founder and chairman of Executive Outcomes, he oversaw the initial defeat of UNITA in Angola, the destruction of the RUF in Sierra Leone, and the rescue of western hostages in Indonesia. He is currently the chairman of STTEP International Ltd, a company that actively supports governments in Africa. He lectures at numerous military colleges and universities in Africa and abroad, and is also an advisor to several African governments.

Executive Outcomes: Against all Odds

This is the second, all revised edition of Eeben Barlow's war memoires, Executive Outcomes: Against all Odds, which has been published in 2018.