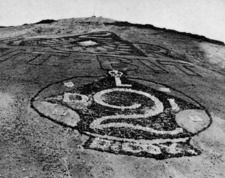 Photo No 1 - Insignia in the Desert of South West Africa SWA, by Bryan V. Cooke. 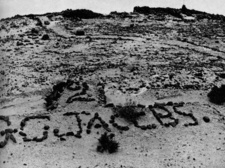 Photo No 2 - Insignia in the Desert of South West Africa SWA, by Bryan V. Cooke. 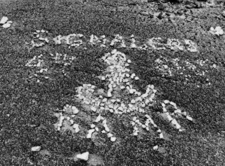 Photo No 3 - Insignia in the Desert of South West Africa SWA, by Bryan V. Cooke. 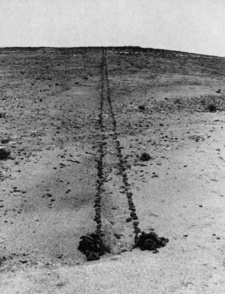 Photo No 4 - Insignia in the Desert of South West Africa SWA, by Bryan V. Cooke. 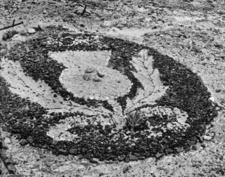 Photo No 5 - Insignia in the Desert of South West Africa SWA, by Bryan V. Cooke. 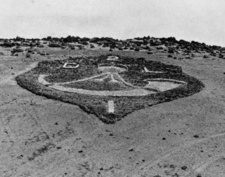 Photo No 6 - Insignia in the Desert of South West Africa SWA, by Bryan V. Cooke.

In this contribution of 1975 Bryan V. Cooke tells about relics and insignia of the 1914-15 Military Campaign the Desert of South West Africa SWA.

THE Namib Desert can be a place of magic, a vast canvas of soft pastel colours splashed with vivid hues of rocks and deep shadows. However, at times, during the midday hours, it can be a harsh soul-destroying emptiness of intense heat, glare, dust and flies all crowding out romantic notions of magic. These thoughts spring to mind when trying to imagine the conditions in April, May and June of the year 1915 when hundreds of South African troops were posted to do dreary guard-duty on the rebuilt Otavi Railway between Swakopmund and Usakos. These were men of the second battalions of three of South Africa's proudest fighting units, the Durban Light Infantry, the Transvaal Scottish and the Kimberley regiments. With them were detachments of signallers of the South African Mounted Rifles who manned the all-important heliograph stations perched on high points near the railway line. Most of the men were volunteers, drawn from all walks of life. They had been hurried to Cape Town and shipped up to Walvis Bay, to a strange desert land, which few of them could scarcely have imagined in their wildest dreams. Yes, wild dreams of exciting battles against the troops of the Kaiser. Dreams which remained unfulfilled. It was only their comrades in the 1st Battalions who saw any real action and then only fleeting clashes interspersed with long marches and idle weeks awaiting supplies. Nevertheless, these men of the 2nd battalions had an important role to fill. The railway was General Botha's life-line. He had to ensure that it remained intact and safe from small German units who had proved their skill in the use of dynamite. Every culvert, embankment and cutting on the line had to be patrolled day and night. Block houses and water supply tanks were constructed at roughly 10 km. centres and all high points adjacent to the tracks were fortified. Each unit pitched tents for shelter and they were supplied by the many trains moving up to the front. Conditions were difficult and uncomfortable from the start. The tents were pitched on open gravel plains with no tree nor bush worthy of the name to be seen. Food and water were limited; corned beef and army biscuits the staple diet and the brackish water was always warm from standing in the corrugated-iron tanks. It is easy, even without recourse to the many books published after the campaign or the letters and diaries received from World War I veterans, to recapture a picture of the conditions endured by the troops as wearying hours stretched to days, to weeks and then months. By day there was no shade available other than in the suffocatingly hot tents and plagues of flies made all meals a misery. The water and the precious few bottles of beer available were always tepid. Sunburn, eye-strain and sore feet were constant problems and by night the men suffered from the damp cold of the desert so unfamiliar to them. The East Wind seems to have prevailed at the time and the Swakopmund hospital was constantly full of troops sent back to recover from heat-prostration and other afflictions. The troops reacted to these conditions in many ways. Many slept their free hours away; others wrote long letters home bemoaning their fate; a few explored their immediate surroundings, hoping to find minerals, especially diamonds as their comrades in the Eastern Force had done down at Luderitz. But a handful took up a past-time which guaranteed permanent reminders of this important episode in the history of South West Africa. These were the enterprising men who set out their initials, names and regimental insignia in stone on the gentle slopes of the rocky Namib ridges adjacent to the railway line. No one knows which company of which regiment first thought up the idea, but apparently the craze soon caught on and a keen sense of competition sprang up. Each group tried to outdo the other in the complexity and skill of their labours. Thus today a journey alongside the gleaming tracks, just a few hundred yards from the tarmac ribbon of the modern highway, provides the curious and the enterprising passersby with fascinating glimpses into the history of that campaign. Just 27 kilometres East of Swakopmund between the railway and the highway, the first relics are to be seen. On the slope of a ridge lies a magnificent badge of the 2nd Battalion, Kimberley Regiment; a diamond of white quartz pebbles encircled by delicate wreaths in brown and the letters 2 K R again in white. Below this lies a smaller badge of D Company of the 2nd Durban Light Infantry. Sandwiched between the two badges, in perfect four-foot high letters, lies the intriguing word "TIT-BIT". Lengthy research in military annals and the kind assistance of the Military Archives in Pretoria, the War Museum in Johannesburg and numerous other military museums, failed to supply an answer to the mystery of this word. Then the help of the associations of the three regiments involved was enlisted. At last an answer, albeit a little vague, was found. A veteran of the 2nd Kimberley Regt. dimly recalled his unit having had a mascot, "either a goat or a horse", named Tit-Bit because of its habit of begging morsels of food from the men. Apparently the animal died "or was put on the butcher's block to relieve the sparse diet" (?) and the name was inscribed on the hillside in its memory, (photograph 1).

Establishment, operation and closure of the prisoner of war camp at Aus