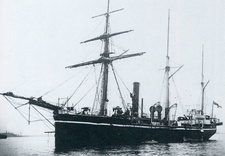 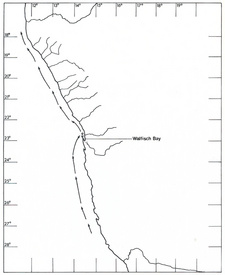 Track of HMS Sparrow, 1891, on a voyage from Simon's Bay to Mossamed touching at Saldanha Bay and Walfisch Bay, South West Africa, then on to St Helena Island.

HMS Sparrow from Elephant Bay to Mossamedes and Cape of Good Hope, July 17th to July 29th 1891. General Remarks on the Passage:

During the passage from Mossamedes to Simon's Bay the ship was kept as close to the land as was permissible so as to evade the current. It was attended with great success a northerly set only being experienced on the 26th and 28th on the former day the wind blowing fresh from the southward. The remaining current shewn seems to be due to the ship being underlogged. A remarkably fine passage all the way little or no sea being experienced. The wind however was so continuously ahead that for 15 hours only out of 8 days 3 1/2 hrs could fore and aft sail be used, the square sails nothing atat [sic] all. During this period the ship was busily engaged in refitting and making good defects. I have no remarks to offer about Simon's Bay.

HMS Sparrow from Simon's Bay to Mossamedes touching at Saldanha Bay and Walfisch Bay, then on to St Helena Island.

General Remarks on the Passage as to the Prevailing Winds: [...] 30th Sep 1891: Weighed and proceeded under steam for Walfisch Bay. Experienced a confused swell from the SW. 4th Oct 11.30 Anchored in Walfisch Bay. 5th Oct 1.30 Proceeded for Mossamedes, swung ship to ascertain variation when abreast of Pelican Point by bearing of Mount Colquhoun. 8th Oct 1.30 Passed HMS "Swallow" standing to the southd ... [...]

HMS Sparrow Remarks on the following places touched at September 25th to Oct 27th 1891 from Simon's Bay to St Helena:

Walfisch Bay: Approaching from the southward the settlement of Walfisch Bay appears over the low sand spit that terminates in Pelican Point. It is rendered conspicuous by a conspicuous clump of trees situated immediately behind the settlement, lying at the southern end of the range of desert hills that extend north of Walfisch Bay. Pelican Point we found exceedingly difficult to make out, the beacon is however still standing that was erected in 1878 and forms a good mark for rounding the point. Pelican Point has extended considerably further out to the north eastward than is shewn on the Admiralty Chart 629. A good anchorage was obtained in the bay on the following bearings: F.S. of resident's house S1/4E. Pelican Point Beacon N19 1/2W. CM. 3 1/4 fm.

Captain Owen's remarks on page 210 Africa Pilot part II edition of 1884 seem to me to [be] very accurate. He states that "common gulls resembled large sheep from the distance of a mile". We observed this on Pelican Point when rounding it about that distance off, the larger kind of sea fowl on Pelican Spit when seen through a telescope certainly resembled sheep lying down. Mr Cleverly the resident magistrate informed me that Port D Theo [Port d' Ilheo] or Sandwich Harbour lying about 27 miles SSW from Pelican Point is no longer available as a harbour for shipping. The low[?[ sandy peninsula DTheo point that forms its western extremity having now closed the mainland, the remainder of the harbour is reputed to be silting up with sand. A hydrographical note was forwarded to the Admiralty about this harbour on arrival at Mossamedes. The wreck that is marked on chart 629 as lying some 8 miles southward of Pelican Point close inshore was not visible to us coming up from the southward although we were close in and could see a heavy surf breaking. I think that the above water portions of it must have now disappeared.

[From the original remark book in the Hydrographic Office, Taunton, Somerset, England.]

This is an excerpt from:

Britain and the Congo in the Nineteenth Century

The relationship and historical events between Britain and the Congo in the Nineteenth Century.