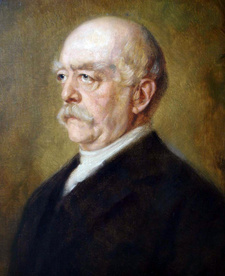 Sporadic German colonizing efforts had been undertaken over the centuries by individuals such as the powerful Welser family of Hamburg in Venezuela (1528-1558) and by states such as Prussia in the seventeenth century1. But these ventures never achieved any permanence and were soon abandoned. Germany’s appearance as a major colonial power began in 1884 with its relatively peaceful acquisition of territory in Africa and the Pacific.2

Most scholars have argued that the reasons behind Germany’s comparatively late arrival on the colonial scene were twofold. They claim that before the unification of Germany by Bismarck in 1871, none of the German states were powerful enough to hold onto their colonial acquisitions, and that Bismarck originally had no interest in colonial matters3. The latter argument does not withstand close scrutiny. Protection of German commercial trade overseas had always been one of the Chancellor’s major concerns. His apparent lack of interest in colonies was but political strategy, since he saw no reason to risk diplomatic confrontation with England by establishing colonies to protect the merchants’ interests as long as these were not seriously threatened. On the other hand, when trading interests were endangered, he was prepared to take vigorous action.4

In 1875, England incorporated the Fiji islands into its empire, expropriating German merchants’ trading rights in the process. Besides strongly and repeatedly protesting such action to the British, Bismarck dispatched a German warship in 1876 to the neighbouring Tongan and Samoan islands to conclude a friendship treaty. German warships appeared again in 1877 and 1879, the express purpose being to safeguard the commercial interests of German Nationals in the areas.5 However actual acquisition of territory in the Pacific did not take place before 1899, when Germany gained control of the Samoan islands6.

Another example of Bismarck’s defensive strategy occurred when the Hamburg-based South Sea Company of J. C. Godeffroy, which together with other German companies such as Hernsheim & Co. virtually dominated the trade in Polenesia, came dangerously close in 1879 to defaulting to and being taken over by the English bank Baring & Co.7 Godeffroy had personally incurred heavy financial losses through unsuccessful speculation in German mines8. He had borrowed money from the English bank, but could not meet the payments. Heinrich von Kusserwo, a Foreign Office official responsible for German overseas commerce, approached Bismarck to save the company from bankruptcy. Bismarck devised a scheme by which the German state would guarantee a 4½ dividend to shareholders. Two German banks, Hansemann’s Diskontogesellschaft in Hamburg and Bleichröder’s Deutsche Bank in Berlin, were willing to underwrite Godeffroy’s debts. However, when this measure, the so-called Samoan Subsidy Bill, was presented to the Reichstag in April 1880, it was rejected and denounced as ‘state directed colonialism’.9 The Reichstag had from the beginning been against Bismarck’s protection of German overseas trade. This was the first time that it succeeded in opposing the Chancellor’s policy.

In 1881 and 1881 another controversy between Bismarck and the Reichstag broke out over the Steamship Subsidy Bill. Bismarck’s intent was to establish regular steamship lines to East Africa and Australia, thereby preventing an English trade monopoly in these areas and at the same time encouraging German commerce10. But once again the bill was rejected by the Reichstag on the grounds that the government subsidy would favour some steamship companies over others and interfere with free competition11. These experiences confirmed Bismarck’s belief that the Reichstag was unwilling to grant financial support for what he considered to be the necessary protection of German commercial interests overseas. His adversaries accused him of being a colonial expansionist. However, the Chancellor himself repeatedly stated he intended no acquisition of colonies. He was still then convinced that colonies would only impose an unnecessary finan­cial burden on the Empire and would probably arouse diplomatic difficulties with other colonial powers like Britain and France.12 As late as 1889 he still said, “I am not a Kolonialmensch”.13

However, the diplomatic constellation began to change in the early 1880’s. To begin with, the era of general free colonial trade was rapidly coming to an end. Britain and France delimited their res­pective areas of influence in Africa north of Sierra Leone and surrounded them with high tarrifs, thus seriously hampering German trade there.14 The Anglo-Portuguese Treaty of 1884 effectively closed the Congo river basin to German commerce in West Africa. As a result, the German government began to receive a multitude of complaints from local German traders, including the largest merchant on the African west coast Carl Woermann, who had been pushed out of areas occupied by the English in West Africa and wanted to prevent a recurrence of this event elsewhere15. Woermann had been forced south to the Cameroons, while the large Bremen merchant F.A.E. Lüderitz had also shifted his business down to South West Africa. The Boards of Trade of such important maritime and commercial cities as Hamburg and Bremen vigorously demanded government protection of Germany’s overseas interests16.

In April 1884, Bismarck received a memorandum from Kusserow of the German Foreign Office outlining a protectorate system which perfectly suited his aims. It recommended the granting by the Imperial government of letters of protection to chartered German trading companies in West Africa, which would give them the responsibility for civil and military affairs in their respective areas of trade. Imper­ial authority was to be represented by a German consul stationed in the Protectorate17. With this concept in mind, Bismarck on April 17th, 1884 instructed the German explorer Gustav Nachtigal “...at the be-hest of the Hamburg firms, to place certain districts there (West Africa) under imperial protection.”18 The Chancellor thus inaugur­ated German colonial expansion, and within a year a considerable part of Africa was placed under German protection.

However, Bismarck’s aim to place these African areas under trading companies’ administration soon ran into difficulties. Jantzen, Thormählen and Woermann, the main trading companies in the Cameroons, and Gaiser in Togo refused outright to take on the burden of administering their areas19. They only agreed to advise the government on colonial matters through a common advisory board they had formed, the West African Syndicate. But even this minimal participation ended in failure in 1886, when the board was dissolved because of conflicts of interest between its members20. The Colonial Company of German South West Africa was founded in 1885, by a group of patriotic German merchants and bankers not involved in colonial trade. This company was so unstable financially that the German Imperial government never saw its way clear to actually transferring any real administrative power to it. Only in East Africa was such power invested in February 1885 in the hands of a company, which was eager to assume its responsibilities. But this also failed. The East Africa Company soon exhausted its financial resources trying to bring the protectorate under effective control.21 During the Arab Bushiri uprising of 1888-89 it was forced to call upon the Imperial government for help. Finally in January 1891 it handed over its administrative powers to the Imperial government. So, by 1891 Bismarck’s protectorate schemes had every­where met with reverses. The German Imperial government had, unwillingly, assumed direct control over the African protectorates.